Cohesity for Good | Shining A Light on Homelessness 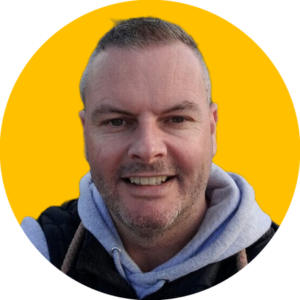 Doing something good in the world takes effort. With so much of our time taken with work, family commitments, and our own human needs, it can be difficult to find time to help those less fortunate than ourselves. While we can’t all drop everything and volunteer, we’re lucky that there are others out there making it a priority.

Take for example Paul Maher, Order Management Specialist here at Cohesity. His job is helping to manage all our global purchase orders and fulfillments, and engaging with teams across our business to meet our clients’ business goals. Before joining Cohesity, Paul was with VMware for 12 years, working in multiple departments including SaaS when it was still a burgeoning, niche aspect of the IT world.

“I was lucky to get SaaS experience before it was a big buzzword in the industry,” said Paul. Since Cohesity’s competitive advantage is in data security and data management, Paul’s experience fits right in.

“I’ve been here for 15 months,” said Paul. “Technically, I’m still new, but I feel like I’ve been here longer than 50% of the team. We’re growing that fast. But also, I felt like I fit right in.”

Paul joined Cohesity to find new challenges and a high-performing and learning company culture that aligns with his personality.

“I was at my previous company for a long time. I knew the ropes and, really, I could have coasted. However, I was intrigued with Cohesity’s superior product offering and values: respect, positive attitude, delivery, integrity and customer obsession. Basically: We look after our own.”

Paul has since come to appreciate our open culture of collaboration.

“What I like about Cohesity is that as an analyst, I’m often on calls with other departments. From entry-level to VPs and C-Suite. It doesn’t matter what our position might be — everyone’s opinions are valued. We’re all treated the same.”

Paul says this is something he values both inside and outside of work. “I believe in people keeping to their word. You can’t just say you’re going to do something. You need to follow up on it. Here at Cohesity, we’re really good for standing up for each other, and for what’s right. People speak up when they feel the need to, and leadership is always available to listen.”

“I was delighted to be invited to contribute as a member of the social impact workstream of the newly formed Cohesity Environmental, Social, & Governance (ESG) Council. We believe Cohesity has a long-term responsibility to maximize value for our communities, the environment and our stakeholders—including employees, customers, and investors. This responsibility drives us to make ethical decisions in all that we do.” 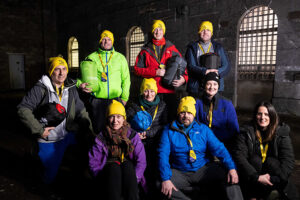 And it’s this vision that led Paul to organize a recent fundraising effort in the Cork, Ireland office: Focus Ireland for its Shine A Light On Homelessness Night. Focus Ireland was founded in the 1980s by Sister Stanislaus Kennedy to support the homeless by getting them involved in homelessness reform and services. The Shine A Light Night was organized on October 14, 2022 to encourage business leaders, companies, schools, communities, and people all over Ireland to sleep outside for one night and raise funds to show solidarity with people experiencing homelessness.

For Shine a Light Night, Paul Maher and eight of his Cork colleagues made their way to the infamous Spike Island prison, where they would spend a night in the open air, with nothing but a sleeping bag, to get a small taste of what it is like to be a homeless person.

Paul and his fellow Cohesians arrived at Spike Island early in the day to receive a tour. “You could almost smell the former tenants of the prison. It was a visceral feeling.” After the tour, Paul and the rest were given a sheet of cardboard to sleep on and a plastic sheet to keep off what was expected to be a light rain in the evening, and given time to set up.

“We were sleeping in the former prison yard. No lights. As soon as the sun went down, it was pitch dark.” Paul said. “It is October, and we are in Ireland. Imagine Alcatraz but 10 times in scale and a history dating back hundreds of years.”

The rain started in the early evening. While only a light rain was expected, the weather took a turn for the worst in the late evening.

“We were all lying on the ground and the lightning started flashing. We’re on an island, and there was a screech of wind. It rained heavily, non-stop, for a couple of hours. There were a couple of guys there who stood over six-feet tall, and that plastic sheet wouldn’t cover them. There are all these legends that Spike Island is haunted. During the night, I thought I felt someone touch my ankle. Lack of sleep or believing in the stories of Spike Island, I am still unsure. It was a unique experience.”

During the night, Paul had an opportunity to listen to some of the homeless people who shared their stories as they are now part of Focus Ireland helping others.

“These people shared their stories with us, quite generously. It was unbelievable to think, being there in that weather, that for some people this is what they live through every single day. I had to ask myself at the end of the night, would I be able to do a second? I think the answer is no I would have really struggled to.”

In the end, Paul and his Cork colleagues were able to raise over two thousand euros, and help out an organization that Paul has come to love.

“Nobody dreams as a child of wanting to be homeless. Something happened to this person that led them to being homeless, and they deserve the same respect we do. Taking the time to listen to a person can be heartbreaking but this is their reality, people are living like this every day and night across the country. Focus Ireland is opening a central hub near our Cohesity Cork office, and I’m encouraging others to go there and volunteer. It doesn’t take much to find empathy with people.”

Sleeping out on Spike Island was a life-changing experience for Paul, something he carries with him every day.

“To all who donated and shared that experience with me and gave up their family time to sleep out to raise awareness for Focus Ireland, I thank you.”

“I realize more today how lucky I am working here at Cohesity. I’m well paid and have good job prospects. I have a roof over my head and money in my pocket. There are a lot of people out there not as fortunate as we are. Donating money and, more importantly, time—especially during the tough times, really helps out the homeless. But I took something away from the experience as well—a better appreciation for the little things.”

Did you know that last year on Giving Tuesday, 35 million people donated $2.6 billion to various nonprofits? Wow! During this year’s season of giving, Cohesity is happy to provide an opportunity to give back to local communities.

Through a partnership with Daymaker, we’ve launched a year-end holiday giving campaign, #JoyUnwrapped! This is a chance for you to support children in local communities with personalized toys, books, learning items, and field trips.

We invite you to join the effort. Purchase gifts from a Child’s Wish List